There are multiple reasons to ignore the Republican National Presidential Convention this week: Hurricane Laura battering the Gulf Coast; unrelenting wildfires in California, the death toll from the coronavirus passing the 180,000 mark, as millions of students from kindergarten to graduate school return to classes — and others face months of isolated online learning; concerns about future postal service as persons wait for needed checks and medications, another young black person, Jacob Blake, shot by police — this time shot in the back, seven times — and the streets of Kenosha, Wisconsin erupt in protest.  Plenty of reasons to ignore the GOPs made-for-reality-television episodes.

It can be overwhelming.  Each of these tragic events deserves attention, human care and response.  There are so many threats as so many innocent people face unexpected, life altering events.

Two images come to mind as I watched the Republican National Presidential Convention.  The first is a balcony curtain seen in Barcelona two winters ago. It was, to my eyes, a delightful piece of whimsical art: two hands appear to be pulling back the curtains on a balcony.  It represents the joy of discovering what might otherwise be hidden.

The other image is a photo taken on the same day in a nearby neighborhood.  There were dozens of these banners, hanging from balconies and roof tops.  The image is a blank face where a mouth has been smeared over and the word “democracia!” is printed below. 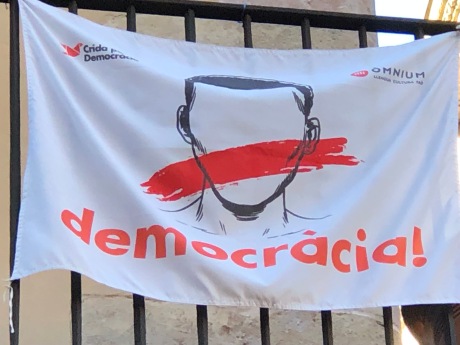 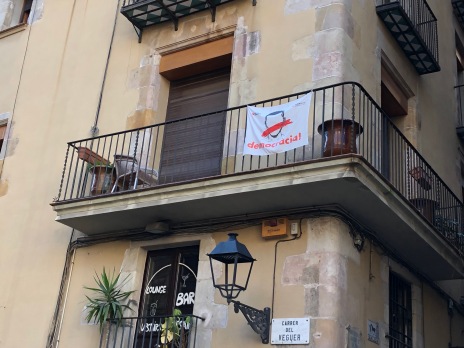 Democracia!  This is a cry heard round the world in our time.  From Hong Kong to Belarus to Damascus to Louisville and Kenosha the cry, too often muted and all too real, rings out.

As I watch snippets of the made-for-television Republican convention, there is little mention of the multiple tragedies that surround and threaten to overwhelm.  In fact, these calls for democracia are not mentioned.

Folks are paraded in front of the cameras — grifters, cons, wanna-be-future-presidents.  There are folks who seek profit or status by supporting the forced alternative reality that is being sold from the platform of fear and grievance.  It is a world deconstructed of truth; a world of scarcity that is broadcast by folks who have more than enough.

All aimed at good persons, who have bought into conspiracy theories because they fear the future and, like too many people all across the world, they are willing to put their trust in a totalitarian idea… No worse yet, trust is put in a totalitarian and narcissistic man.  He actually suggests we shouldn’t believe what others may say or think — trust him only as a source of truth.   Forget science, ignore history, avoid moral thinking apart from a few made for grievance and simplistically answered dilemmas.  He who, though you know he cheats and manipulates, still claims to be the one to bring the order and easy solutions you hope will one day come.

Truth is turned on its head — the immigrants who bring talent and a willingness to work are turned into the enemy.  Young people who seek justice and protest out of conviction are turned into rioters.  NATO becomes our enemy and Russian operatives who seek to undermine our common well-being are turned into our friends.  After all, the supreme leader sends love letters to the North Korean dictator and speaks fondly of the tyrant in Turkey.  He is “doing foreign policy differently” we are told and any appeal to human rights disappears.  The scriptures are not read or studied; no.  The “holy book” is but a symbol, a prop; it is held up like some talisman that can block out the truth contained in the great and true counter narrative within the book.

The idea that there is only one person who can fix things, all of the social disarray around is what this man openly stated four years ago.  Today, in the United States the true believers are the Trumpists.  Who would imagine, who could imagine, a political party that decided it needed no plans for the future, no party platform, especially when tragedies abound?  Who could imagine?  Would someone please pull back the curtain and let the realities of our situation be made apparent.  Might “we the people” discover it is essentially our shared, widely enacted, response that can begin to bring renewed health and hope.

There are also well meaning, sincere folks.  Persons I think of as “the genuine articles” who are given a cameo performance on the GOP stage.  They have bought into the big lie.  The lie that the world is an either/or place.  Either you are with the supreme leader, and that is the only way to fix things, or you will lose your place of security, of status and order.   There are multiple alternate paths for a people who might seek truth together; however we will have to work with persons who see some parts of reality differently.  Pull back the curtain.  There are options to being a Trumpist. It will require pulling back a curtain to see that those who differ are also Children of God, like you? The Trumpist wants to say all who differ are “socialists.”  Such astonishing, deceptive, untruthful language is repeated over and over until good people believe the lie.

Democracy means we will have to work with others to solve the complex real world problems; we must, in fact, do it together.  I so value the good folks who seem stuck in this trap of binary thinking — they are my neighbors, my friends, my family.  Still, my reality is that our democracy is now being smothered.

It is like a giant pillow of grievance and fear is forced down across the face of our body politic.  There is not room for protest, dialogue, compromise.  As Bill Moyers put it “A democracy can die of too many lies. And we’re getting close to that terminal moment, unless we reverse the obsession with lies that are being fed around the country.” (See Bill Moyers on Truth).

4 thoughts on “A Democracy Smothered to Death”