This is the season when many Christians read scripture from the second chapter of Matthew’s gospel.  It is the story of the Magi’s visit, the fleeing of Mary, Joseph and the baby to Egypt and the slaughter of innocent children by Herod.

What a contemporary, compelling and relevant story from Jesus’ infanthood this is for us.  More, I have been thinking about all the ways a “globalist Jesus” is demonstrated by his entire life. His story begins as that of a refugee.  His teachings and ministry clearly move past borders of any nation, ethnicity or social class. While it appears his adult ministry was limited to Galilee and Judea, what the gospels record is a Jesus who, in our day, could be accused of being a globalist.  He is one who continues to surprise his listeners with the vision of God’s people as people who are boundary breakers, who travel as sojourners with those who are excluded or on the margins of a society.

Consider the powerful parable of the Good Samaritan, or think of the words of the Sermon on the Mount.  Or, take a moment to repeat the Lord’s Prayer.  Slowly now, listen to each word and phrase.  “Our father… thy kingdom come… on earth… give us… forgive us as we forgive…”.   It is a prayer that is communal more than individual. Then there are those words of the so-called Beattitudes filled with global prejudices.  Take time to read Matthew chapter 5 or Luke 6.  Open your Bible, dust it off first if necessary.  Am I wrong?  Clearly the man Jesus could be charged with being a globalist and unpatriotic when it comes to any single nation or ideology. 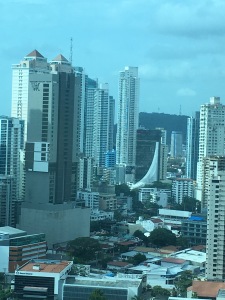 Today I write from Panama City, Panama.  It has been decades since I last visited and 47 years since Elaine and I taught at the Instituto Pan Americano (IPA).  IPA is a remarkable Methodist school known for bilingual and multicultural education.

Panama is a very different country than I first experienced in 1969.  Much wealthier in some respects, still struggling in others. The skyline of the city is resplendent with high rise banks and luxury hotels – stretching in every direction. I can’t help but reflect on the contribution IPA has made to the emergence of Panama as an international financial center (for good and ill).  Being global or multicultural isn’t a path to solve all problems.  In fact, new difficulties are created that require wise and humane systems of social, cultural and religious activity.

Those who know Panama can see in the distance, in the photo taken on New Years Day 2017, a photo of Ancon Hill. Until 1977 this location was the U.S. home of the military’s Southern Command.  From Ancon headquarters many Latin American dictators were supported and some democracies subverted all in the name of U.S. security.  Yes, many good things were also supported but as they say — “it’s complicated.”  Surely Panama’s history (for good or ill) cannot be told apart from the story of the American empire.

And, so we arrive at the ethical challenges of seeing Jesus as a globalist.  Easy answers about building walls, adding tariffs, registering those who seem different, choosing sides so that the whole world can be categorized as friend or enemy, certainly have an appeal.  They can even win elections and bring certain persons to power.  However, such perspectives are contrary to the teachings of the globalist Jesus.

I am intrigued and concerned with the increased influence of the so-called “militantchurch” phenomena in Roman Catholicism these days.  They are more nationalist than “catholic.”  They are more protectors of privilege, even bigotry, than followers of the Jesus of the Bible.  Or, what of the recent bigotry of the likes of Franklin Graham or Jerry Falwell Jr. when it comes to this Jesus?  I read what they write and listen to what they say and rarely if ever hear a reference to this Jesus.  Nor do any of these pseudo-gospeliers seem to ever refer to the teachings of Augustine or Francis of Assisi.  Augustine wrote extensively about a Jesus who so engaged and loved the whole world so that we might seek to avoid violence and find an ethical path when living with empire. Francis offered a way of peace with others and all creation.  Two more globalist followers of the globalist Jesus were they.

But what about me?  What about my cohorts?  My critique of the militantchurch or of the apparently gospel-blind fundamentalist comes too easily.  When I visited IPA with Clarence Smart and Adrienne Mims recently I found myself wondering if the mainline church of today is able or willing to hear the call of the globalist Jesus?  Where is the evidence?

We seem to be tongue-tied by recent world events, more concerned about growing local congregations in our local places than starting schools, hospitals or agricultural programs reaching the global realities all around. Local can be a good focus but never the exclusive focus. I remember the missionaries and local leaders in Panama back 47 years ago.  They spoke as ones who knew the reality of Jesus the globalist.  They wrestled with the reality of empire and the tough ethical questions of development, economic or otherwise.

I remember the hundreds of students who would bring their tuition money each month, coins wrapped in handkerchiefs.  Fathers had driven buses charging 5 cents a ride and mothers were maids working 10 hour days and there was the hope of something better. But it was complicated — no simple “art of the deal” here.

Which child is to be educated?  What of cultural traps that made some more special than others or the different imbalanced pay scales used by the canal company that kept some poorer than others? And what of militarism, U.S. intervention, drug cartels, the laundering of money?  Followers of a globalist Jesus understood the need to be “wise as serpents and peaceful as doves.”  No easy task in a world full of Manichaean temptations.  My missionary mentors and indigenous church leaders taught me to think globally as well as locally.

Today, too many of our bishops write columns about cultivating the inner spiritual life, cautioning against critique of church practices, and remain mum when it comes to the assault on the poor and the sick.  They want to “get to know our congregations” but seem to miss the realities of the communities in crises surrounding these churches. The focus is all inward, about “me and my church.”  Surely IPA would have never been founded as a bilingual and multicultural Christian school had this been the focus 100 years ago by Methodists in Indiana. Spirituality is both inwardly focused and outwardly lived.  Both. That’s the point.

In my home state of Indiana there is an opioids drug abuse crises, an innocent man goes unpardoned by Governor Mike Pence, a repeal of the ACA is likely meaning the option of reasonable preventative health care for the poor will end.  Ironically this repeal, in the name of economic concern, can lead to the closing of many smaller hospitals in our less wealthy communities — thereby creating more unemployment.  What has the United Methodist Church in the state, with more than 1100 congregations had to say or do about any of this?  Crickets….  nothing… instead, only a focus on individual spirituality and congregational development.  This is the self centered message of an anxious church to a troubled world.  Christ have mercy.  Sadly, ironically, this can become an ever spiraling downward process into self absorption, protectionism and irrelevance.  Will we hear and follow Jesus the globalist?

Some today seek to make the term globalist a negative one.  I disagree.  Disciples who follow a globalist Jesus are more needed today than ever before in my lifetime.

3 thoughts on “Jesus, the Globalist”