Lessons from the Barber Shop 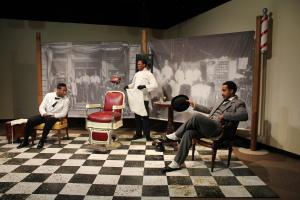 One of the challenges of moving to a new community is finding a barber.  For nearly eight years I had been in the hands of Manny, my barber — or his father before him.  I knew about Manny’s family and where they vacationed — and he knew about mine.  In our new home, I discovered yet again that starting over on haircuts can be both a test and a teaching experience.

As my appearance no doubt shows — I have never sought a stylist or looked for any of the extras offered by upscale salons.  Nope, I liked the democratic air of the good ole, two or three chaired, small barber shop.  These are the places where opinions are uncensored even if sometimes overblown.  Here is where you hear the young ones brag and the older fellas complain.  Here I can see my gray hair drop to the floor and watch as it is swept up into a pile along with the darker shades of hair from younger customers.

I’ve tried nearly half-a-dozen barbers since settling in northern Indiana last summer.  Each one was a teacher, as well as a barber.  This I found true from the tattooed fella who gave a fine haircut, but was so good, that he always had a long line of customers ahead of me, to the old-timer who opined that he had been cutting hair since “Nixon was telling lies in the White House and, that none of those crooks following him there got any better.”  So, in the past year I have experienced a range of clips and snips, views of the news and an open-sourced set of opinions about life, love, politics and religion.

The barber shop is a place to listen in on everyday perspectives on the world.  Of course, these male refuges remain (along with our Sunday morning worship services) among the most racially segregated places in our society.  I like to listen, especially if I can stay anonymous.  I learn a lot, about how some folks are thinking about everything from foreign trade to who’s been arrested and why.  I’ve heard opinions on how to save a marriage and what’s gone wrong with the county fair.  I was able to learn a lot, that is until someone, usually the barber, asked me what I do for a living.  I get some cover by simply saying I am retired… but the questions keep coming and the truth is squeezed, like Brylcreem from a tube, out of me.

“You’re a preacher, I thought so!” someone says, and with that, I lose the advantage of hearing unvarnished and often quite colorful language about life and the world around.

One of the joys of retirement has been the advantage of not being “on” as a professional Christian.  And, until I was recently “outed” as a retired pastor, I was able to listen in on colorful language and ribald boasting of men in the barbershop of a small rust-belt community of the Midwest.

I listened to talk about the economy, politics and sex, baseball and hockey, motorcycles, farming, golf and flying model planes.  The talk wasn’t as full of victimization, anger, fear or racism as some of our talk-radio hosts seem to encourage.  Instead, these were folks seeking company, a good laugh or maybe a story to re-tell.

Talk about the church, before I was outed as a pastor, wasn’t very positive.  The church was seen as a place trying to get your money, to build another building or where a fella would have to work all weekend at a fish fry when he would rather be just fishing.  Honestly, the church was viewed as just another program or another project to be avoided.  Yes, I heard the word “hypocrites” more than once when talk turned to church.

Please don’t misunderstand, while I don’t confuse what happens in a barbershop for important and potentially transformative work of the church, there is a lot that goes on in barbershops that is more honest and helpful than in much of what happens in churches these days.  It is about relationships, first; a story, second; and, some honest talk about the real world, third.   Of course, if we let folks know that church life could be this simple and direct it would put all our church consultants and revitalization specialists out of business.  And, building such relationships wouldn’t cost as much as a shave and a haircut!

It’s as my barber said last week, “You know, most people are hungry for someone just to listen to them.  When I remember that, I am happiest in my job.”  Should I tell the barber he is involved in ministry, or would this spoil it for him?