Blood Letters — A Witness to the Church

Earlier this year, the book “Blood Letters: The Untold Story of Lin Zhao, A Martyr in Mao’s China” written by Lian Xi was published (New York: Basic Books, 2018).  I commend it to you.  Lin Zhao’s story is that of a young woman who confronted with tyranny, regained a centering point by reexamining and recommitting to her Christian faith.  She moved from being a dedicated member of the Communist Party, then experiencing the tyranny of Mao Zedong, to become a voice against totalitarianism.  Awakened again to her Christian faith she rejected the deceits and brutality around her exhibited by authorities.

In seeking to find a life of integrity and truth amid the brutality and despotism, this remarkable woman drew on the Christian faith she had learned as a youth when educated in Methodist Schools.  Her faith became the source of hope — and truth.  She wrote letters and essays that circulated among the faithful outside of prison. 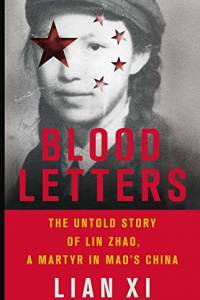 In prison, authorities took away her paper and pens.  Lin Zhao continued to write.  She wrote on torn pieces of bedding, using her own hair and blood from pricked fingers to compose her letters and reflections.  Later, when she was given writing implements again, she often continued to write with her blood.  Lin Zhao was martyred in 1968 for her beliefs.  She is seen as the most famous of the martyrs of this time. Today, thousands in China continue to be inspired by her resistance to evil.

As intolerance, bigotry and suppression of descent rise in our world today, the witness of Lian Zhao becomes especially significant.  As attacks on a free press surge threatening to overtake truth and decency, this singular voice is a gift to us all.

My sermon on November 25th referencing her story — and that of many others.  If you wish, you can read it here: God’sMirrorforChurch 11-25-18.

We give thanks for the courage and witness for all of God’s people, especially for the witness of Lin Zhao.